After a cycling season of racing in Brooklyn’s Prospect Park, Foundation ends up on the parks podiums. Alex Sanborn celebrates the overall win in the Lucarelli & Castaldi Cup Pro/1-2-3 series and Nathan Bauer joins him by winning the Master’s competition as well as securing a second place in the overall Category 4 series.

Prospect Park racing, where New York’s finest cyclists race for the Lucarelli & Castaldi Cup, links 8 races into an overall competition for the Pro/1-2-3 category as well as for the category 4 cyclists. The series kicked off in April culminating into a grand finale that took place during mid August.

2015 is definitely the year of Foundation’s Alex Sanborn. Foundations A-team manager started the calendar season as a Category 3 racer, quickly secured his upgrade and kept on bringing the good news by landing various podium spots. USA Cycling awarded Sanborn with an upgrade to the highest amateur category early this summer.

In the Lucarelli & Castaldi Cup Sanborn made the podium three times. During the spring months in breakaways with his teammates Alejandro Guzman and Patrick Torpey and later with his rival Augusto Sanchez. Out of the 8 races in the series Alex finished three times in second place and secured two 4th placings in mass sprints. 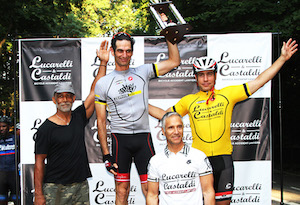 The closer Nathan Brauer gets to his fiftieth birthday the better he starts to race. His results in Prospect Park have been better than any other year. Brauer has been racing for over a quarter of a century and is currently in his 11th season with Foundation. Winning the Master series, a category for the 40 plus racers, and scoring second overall in the Category 4 series show the proof of his finest year ever.

Brauer does not only win on the bike. What did he do with this year’s race winnings? He gave back and supported Ric & Jill Wolf Foundation Cycling’s Walk to End Alzheimer. Did we already say you could donate too?