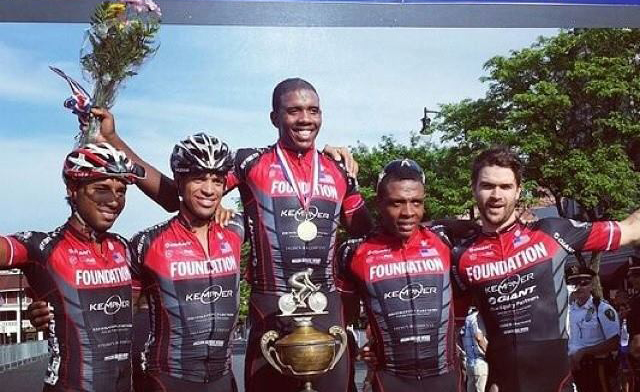 Headlining the roster are two pairs of brothers: stalwarts Nick and Jesse Keough of Cape Cod, Massachusetts along with fast finishers Adam Alexander and Joshua Alexander of Trinidad and Tobago. Among Josh and Adam’s many victories in 2014 are the NCC Tour of Somerville and the “Central Park Triple Crown” (Dave Jordan Classic, Mengoni Grand Prix, and Lou Maltese Memorial). Nick and Jesse form the core of our national-level race squad and, as members of the famous Keough family, are well-known names on the USA CRITS Series and NCC circuit.

Rafael A. German Meran of the Dominican Republic returns to the team as its star rider, while 2014 New York State Road Champion Sammy Moseley will be back to show us yet again how bright this 19-year-old Cornell student’s future in cycling will be. The team also returns veteran riders Alejandro Guzman of the Dominican Republic and Abraham Soler of Colombia, as well world famous blogger, cyclocross racer, and bike messenger poster child Dan Chabanov of New Jersey. Neil Bezdek continues to lead the team as captain and band manager/travel agent for out of town races.

Foundation’s new talented 2015 riders are Anthony Rod riguez, Norlandy Tavera Sanchez, Cristian Torres, and Quinten Winkel. All four new riders will race for Foundation’s elite squad, and each one of them brings their own qualities to the team.  Anthony Rodriguez is a 22-year-old healing from the Dominican Republic and, like many of our riders, has multi-disciplinary experience that includes mountain bike and track racing. Norlandy, 25 years old, is from the Dominican Republic as well and brings crucial “last kilometer” sprinting and leadout skills, honed through years of racing on the velodrome.  Cristian Torres is our 23 year-old all-arounder who hails from Colombia and spent a majority of last season racing in the US. Our fourth new rider is 24 year old Quinten Winkel. It will be Quinten first full season with Foundation, however, he isn’t new to the team, and he certainly isn’t new to high-level racing. Quinten has joined us in the past as a guest rider for events in Trinidad and Tobago. The time-trial specialist has significant experience in all types of races in the Netherlands, Belgium and the rest of Europe, including the U23 World Championships in 2012.

Five members will not return, and we happily wish every one of them success in 2015 as they all move on to professional UCI Continental teams.

The team looks forward to a full schedule in 2015, targeting local, regional, and national-level races as we continue to develop the next generation of professional cyclists. We thank our sponsors Argon 18, SRAM road, Zipp wheels, LAZER HELMETS, PowerBar, Spinlister, Hincapie Sportswear, and many others for their dedicated support, as well as our parent organization Century Road Club Association (CRCA).