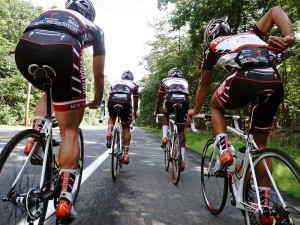 Coming in 2nd overall in the 2012 USA CRITS Championship Series,CRCA/Foundation returns to the Series as a Division 1 Team. The 60-member team housed within the even larger Century Road Club Association, Foundation is named as such for its mission to support charity while engaging a large network of cyclists and civic leaders, raising money for a multitude of organizations.

CRCA/Foundation has proven itself as one of the nation’s top ranked amateur teams in the USA CRITS Series. Looking forward to building on their success, they are planning for a strong start this season by sending six of their guys to the kick-off race in Tucson, AZ, for the OPTUM/TMC Old Pueblo Grand Prix.

Bezdek shared some thoughts on the other two new members to CRCA/Foundation for 2013–Jesse and Nick Keough.

“Jesse and Nick Keough share impressive family pedigree with their brothers Luke and Jake of UnitedHealthcare, two of the most accomplished sprinters in North America. Nick has valuable experience in the professional peloton, while young Jesse at 20 years old is already on a trajectory similar to his brothers. We’re excited to help him explore his potential.”

So what is CRCA/Foundation doing to prepare for the OPTUM/TMC Old Pueblo Grand Prix?

“Most of our guys raced Old Pueblo last season, so we’re familiar with the course and race dynamics,” said Bezdek. “Our trio from the Dominican Republic–Rafael Meran, Euris Vidal, Alejandro Guzman–have been competing at home and already racked up a few wins, so we can rely on them to put on a good show in Tucson.”

After the race, the crew will stay in Tucson and train for a couple more weeks until heading to the Delray Beach Twilight for round two of the 2013 Series.

Adam Alexander – Adam is a three-time road race national champion in Trinidad and Tobago, where he grew up racing bikes with his father. Now racing in the United States, Adam’s international experience also includes a 9th place finish in the 2011 Pan American Games.

Alexander Bremer – Xander took up racing as a college student at Columbia University and set his sights on the fast and gritty racing mecca of Belgium immediately after graduating. While racing full-time from 2009 to 2012, Xander successfully taught himself the craft of carbon fiber repair and is now studying for his master’s degree in Product Design at Stanford.

Dan Chabanov – His nickname might be “Jersey Dan” but Mr. Chabanov originally hails from Moscow, Russia. Dan cut his cycling teeth as a full time bike messenger on the streets of NYC. Adept at both hilly road races and criteriums, Dan also shines on the cyclocross circuit during the fall and winter months as a member of the Richard Sachs/RGM cyclocross team.

Alejandro Guzman – Alejandro has been on Foundation’s Elite Team longer than anyone else on roster. Originally from the Dominican Republic, Alejandro moved to New York City in 2002 and has been an integral part of Foundation ever since. When he isn’t riding or racing in the USA CRITS Series, Alejandro coaches aspiring racers in the NYC area and runs a private bike repair and maintenance business.

Jesse Keough – Jesse joins Foundation for 2013 along with his older brother Nick. At only 20 years old, Jesse is already an established presence on the national circuit and is following in the footsteps of older brothers Luke and Jake, both on the United Healthcare Pro Cycling team. Raised in a home in Cape Cad that contains 70 bikes in the garage, a BMX track in the backyard, and a racked-out “Keough-mobile” Sprinter van in the driveway, Jesse’s cycling pedigree provides a solid foundation and unlimited potential for 2013.

Nicholas Keough – Nick has been racing bikes in almost every discipline since he was five years old: BMX, mountain, cyclocross and road. The owner of side two businesses–graphic design and custom wheel building–the recently married Nick still finds time to ride and race as a full-time endeavor. Nick has experience racing professionally with Kenda Pro Cycling and brings an all-arounder’s skill set to Foundation.

Rafael Meran – Rafael returns to Foundation as one of the team’s most consistent performers. Equally capable of sniffing out the winning break or speeding to victory in a field sprint, the native of the Dominican Republic shined in 2012 by earning 4th overall in the USA CRITS Series.

Euris Vidal – Euris is the team’s go-to sprinter. As a child in the Dominican Republic, Euris developed his love for cycling while watching the Vuelta Indepedencia. This year he achieved a lifelong goal by winning Stage 3 of the same race. Euris brings years of experience to the team and finished third overall in the 2012 USA CRITS Series.