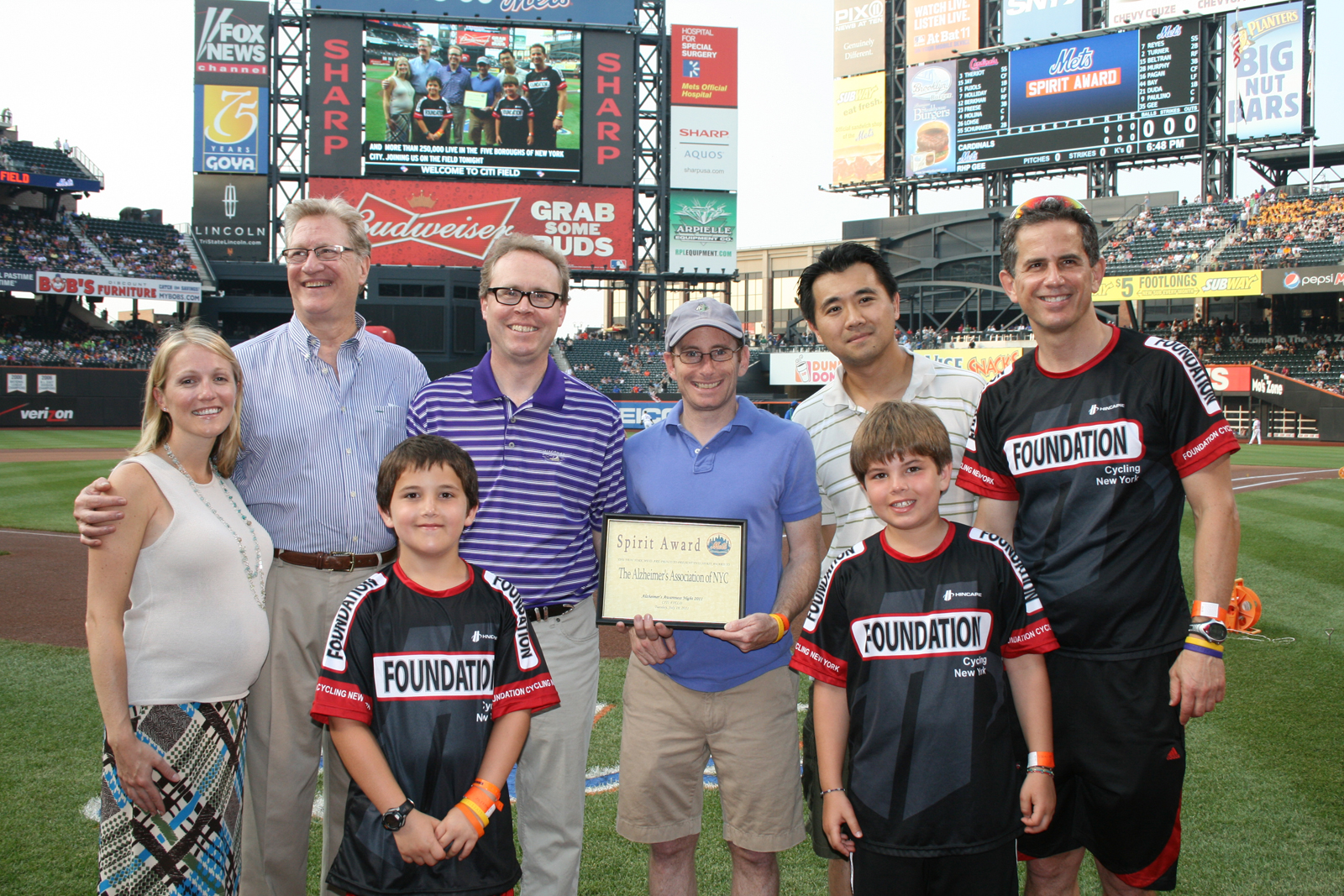 By Foundation Cycling / 25 Sep 2014 / Comments Off
Ric, Jill & kids recognized for their contribution

The choices we make do not just affect our personal future but also that of our community. One of the founders of Foundation Cycling New York City, Richard “Ric” Wolf translates that into his choices daily. For more than a decade, he and his wife, Jill, together with the Foundation Cycling team, have raised over $150,000 for the Alzheimer’s Association New York City Chapter.

Ric and Jill’s journey started with tragic news about Jill’s mom, Frances Salz, being diagnosed with this disorder. Jill noticed changes in her memory, thinking and behaviour. Fran’s battle with Alzheimer’s lasted for five years and in her memory Jill & Ric started to raise funds to try and find a cure for this dreaded disease. Since 2003, they have formed one of the top teams of the “Walk to End Alzheimer’s”, states Lou-Ellen Barkan, the President and CEO of the New York City Chapter.

In recognition of your dedication to our cause and your ten years as a top fundraiser for the NYC Walk to End Alzheimer’s, we would like to honor the Ric & Jill Wolf/Foundation Cycling New York with our first “Walk All Star” award at this year’s Walk during the Opening Ceremony. You have been leading the way for a decade, and as we celebrate the 25th Anniversary of the Walk in New York City, we want to take a moment to publicly acknowledge your incredible dedication and support.
Once again, we thank you for your continued support of the Alzheimer’s Association, NYC Chapter.

For the eleventh year in a row Ric and Jill will walk again to raise money and awareness for Alzheimer’s. On October 19th they will finish their walk in Manhattan’s Riverside Park. In memory of Frances Salz you can help Ric and Jill make a difference in the fight against Alzheimer’s.

Almost every minute (every 70 seconds), someone in America develops Alzhemer’s. Projections read that by midcentury, it will happen every 33 seconds. As of today, more than 5 million Americans are living with Alzheimer’s.

Foundation Cycling New York’s President Ric has seen Alzheimer’s first hand, eventually taking his mother-in law’s life. “This disorder slowly infected the mind of my mother-in-law and took away her vibrant personality. Watching her decline was heart wrenching. You can’t always judge a book by its cover. She looked great but the pages inside slowly turned blank. No one should have to go through this…”

Thank you for your donation